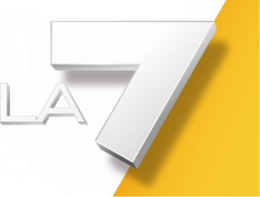 La7 is a private national terrestrial Italian TV Network that was originally launched as Tele Monte Carlo and launched by Telecom Italia in 2011 when it headquarters were moved to Rome, before its privatisation in 2013 . The 24/7 international satellite channel broadcast 24/7 in Italian offers a variety of programmes, including News & Current Affairs, Sports, Comedy, Culture, Cooking and Talks shows, general Entertainment, Movies and more.